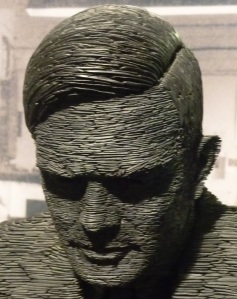 During this year multiple events, organized in different venues around the world, commemorate the centennial birth anniversary of the great mathematician Alan Turing. He is considered one of the Computer Science fathers thanks to contributions as the seminal paper “On computable numbers, with an application to the Entscheidungsproblem (1936)”. This paper presents a formal model (called Turing Machine)  aiming to define what computation is. This formalisation, in conjunction with other approaches, establishes the ground of computability theory.

I took this Turing head sculpture at Bletchley Park, Britain’s codebreaking centre, where he worked for the Government Code and Cypher School during the Second World War.